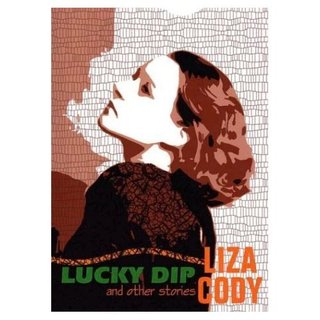 LUCKY DIP and Other Stories

Click here to get to the publisher's page for this book.

I had written four and a half full novels before I ever attempted a story. I was intimidated because a short story needs to be more perfect than a novel. There’s no space to go wrong in a story. To paraphrase Amy Bloom (whom I revere): "You can say of a novel, 'Really great book, falls apart in the last sixty pages.' You don’t have that option with a short story."

I'd had requests, but I’d turned them down. Which hurt: if you are a professional and a freelance it hurts to turn down a paying gig. So I talked the problem over with a writer who'd written many stories. The first thing he said was, “Say yes.” The second was, “If you’re scared of short stories, don’t write a short story. Pretend you’re writing to a friend. Write a good letter. That’ll give you an idea about pace and length.”

I took the advice and relaxed and wrote a story. And I’ve been writing them – usually in response to requests – ever since.

I talk more about writing stories in the introduction to Lucky Dip. Meanwhile here are some other people’s comments about the collection.


"I don't have room to deal with individual stories here but I must say that this is one of the two or three best single author collections of the year and the reason there should be an Edgar for such collections.

"Cody can be funny, wry, sad, violent — all in the space of two pages. There's a hard-headed working class feel to most of her important material, the same thing I always got from the Orwell of Down and Out in Paris and London, a combination of anger and compassion, usually in the setting of a kind of third-world version of London. She adds wit to the mix."


"Liza Cody’s The Lucky Dip and Other Stories probably has more kinship with Raymond Carver than the usual crime puzzle, and features quirky, dark tales — an excellent collection. Creator of Anna Lee, a character introduced in the novel Dupe and featured in an A&E series Cody gathers seventeen stories in all, with two written specifically for this book and another previously only heard as broadcast on the BBC. The title story about a street kid surviving on the mean streets of London, won the Anthony Award for best short story of the year in 1993."


"Most of these seventeen stories, three new and the rest from original anthologies, are subtle character studies from a first-person female viewpoint, often downbeat and sometimes obscure, but expertly written and crafted. Some of the best (e.g. the adapted BBC radio plays "Doing It Under the Table" and "Chalk Mother") aren't really crime at all."


A reviewer on Amazon says:

"This collection was my first sample of Liza Cody's writing, and as an old school hardboiled fan I have to say that the selection totally blew me away. This is terrific stuff, from the word go. Cody can be funny, poignant and violent in the same paragraph. She is a master of subtle mood swings. The material collected here goes from one end to the other but never with a predictable turn or a false note. There is a rough blue collar sensitivity at work here, which is a rare pleasure these days when most popular writers concentrate on either the rich or the popular. Cody champions the underdog, with sly precision that touches on masterful.

"LUCKY DIP is one of the best collections I've read, period. Fast paced, entertaining, with an underlying sense of human nature that completely sneaks up on you with it's understanted accuracy. Brilliant stuff, a great introduction to a marvelous author. Check it out."